Accepting the unacceptable : a thought for Valentine's Day

Here’s a simple yet profound thought from Jessica at indexed about gifts for Valentine's Day. [link] 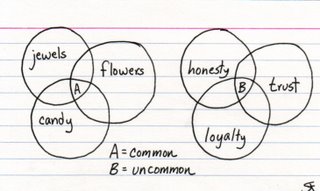 Why do we accept this as normal?

I cannot see that any working culture marked primarily by constant haste and distraction, continual pressure, and frustration on a massive scale could possibly be described as either “efficient” or “inevitable.”

Yes, the business environment is competitive. It always has been. Is it any more competitive than it used to be? I doubt it.

Yes, the business environment is competitive. It always has been. Is it any more competitive than it used to be? I doubt it. The competition is simply different, that’s all. But even if the level of competition has increased, that’s no reason to accept a wretched kind of workday and career experience as normal.

Human beings choose and sustain their working environment the way it is. It isn’t a natural product, like the weather, over which mankind has no control. We chose capitalism over communism and a centrally-planned economy; that wasn’t an “act of God,” it was an act of mankind. We choose to operate within a global economy, because enough people believe that it works for them—at least in the sense of increasing their prosperity and that of their organizations. Boards of directors don’t have a totally free choice over how they structure and run their businesses. They have to comply with the law and various regulations and expectations. Yet, even with all that taken into account, they still have a great deal of freedom in what they choose to do. That’s even more true of private companies, family-owned businesses, and sole proprietors.

Why do so many stick to a business model that creates so much stress and misery? Is it a failure of imagination, a lack of nerve, or a simple ignorance that any alternatives are possible. People like Ricardo Semler have shown that there are other ways—probably many, many of them.

Shouldn’t we be trying a few?

Tell-a-Friend about this web page

# posted by Carmine Coyote : 7:12 AM
Comments:
CC,
I wonder what would happen if more and more companies in the US tried this. I remember a story about Harley-Davidson from the 80s when the Japanese motorcycles were taking over the roads and practically putting HD out of business. They ended up turning to the employees to turn the company around, not just in design, but in quality and operations. It's funny how a lot of 'greatest success' stories usually involve employees ruling over management and making it happen.

Dan here again. Not two seconds after posting my last comment, a thought popped into my head. The US always prides itself on being the role model of democracy. The US prides itself on being the role model of capitalism. How ironic is it, that the MAJORITY of US companies run as a Dictatorship, and the execs, boards, upper managers, all get compensated like they're in a socialist company. (head shaking here) THAT is something to consider, especially when you see a company from Brazil take what the US was founded on and roll it into a company to make is successful. We preach to the world that democracy and capitalism are the best systems, yet we won't allow those same systems to work in business. Go figure.

Thanks for your comments, Dan. Both very useful and interesting thoughts.

Given how many organizations mouth the words: "Our employees are our greatest asset," it's interesting how very few act as if they are.

I suspect the culprit is the obsession with power. It's one thing to honor the idea of democracy and respecting others; quite another when you realize that doing so would allow other people to have some power over you, instead of the other way around.

Business leaders act like dictators for the same reason dictators act that way: for the power, wealth, and sense of personal importance it brings them.

It's a very nice read and so true.

I love the way you end it:
"Is it a failure of imagination, a lack of nerve, or a simple ignorance that any alternatives are possible."

It inspires to change things and actually not only work wise.

This work is licensed under a Creative Commons Attribution-NonCommercial-NoDerivs 2.5 License.

Tell a friend
about this site

The Eight
Principles of
Slow Leadership